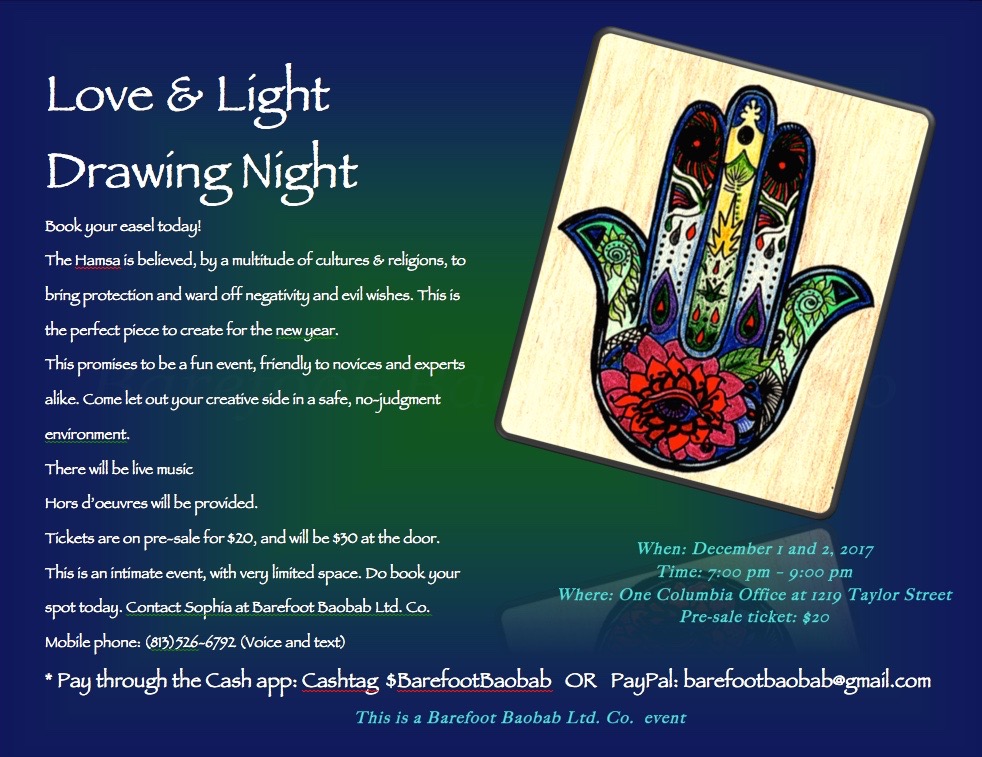 We are exactly one week away from our first Love & Light Drawing Night event in downtown Columbia, SC!

Come join us as we apply our artistic selves to create our own beautiful interpretations of The Hamsa.

How to pay: CASH app $barefootbaobab  OR

In the midst of all the details that life presents us each day, taking a moment to prepare ourselves, make plans, center our beings and cleanse the space within & around us…all these things may just go by without being done. I want to come together with those of you who want to take the time to create a better…space, and offer you the option of drawing The Hamsa to have in your home.

What is The Hamsa? As an amulet with its origins in Ancient Egypt, The Hamsa has been used as a symbol of protection for ages for warding off the evil eye.

Khamsa, or The Hamsa has been associated (in theory) with the goddess Ishtar and the Phoenician goddess Tanit. A different amulet used by ancient Egyptians may also be connected to this protective hand. As Isis, Osiris and their son Horus formed a trinity, ancient Egyptians had a three-finger amulet that represented the three deities; Isis & Osiris being the two fingers and Horus being the thumb. This amulet was believed to provide protection of parents over their children.

Some of the other uses of The Hamsa as an amulet have been to bring prosperity, peace of mind/heart, and luck.

A few people have asked why the color of the eye in this amulet is usually blue. Kathryn Bard explains in her book, An Introduction to the Archaeology of Ancient Egypt, that the eye of Ra was red to depict the sun, and the eye of Horus was blue to depict the moon. (n.b.: When you see a right eye, it is Ra’s. When you see a left eye, it is Horus’s)

In later times, this fortuitous and protective symbol received other names, such as The Hand of Fatima and The Hand of Miriam, from Islamic and Judaic traditions respectively.

This is what some websites have to say:

Gods and Myths of Ancient Egypt : authored by Robert Armour.

An Introduction to the Archaeology of Ancient Egypt : authored by Kathryn Bard.

The Hamsa : authored by Wikipedia contributors.

These are some sample images of The Hamsa: 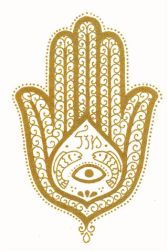 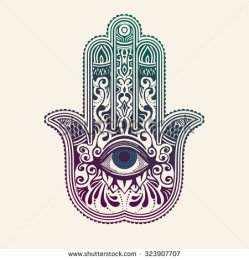 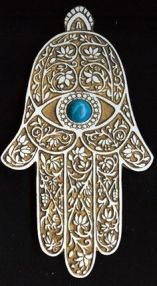 This is where the One Columbia office is: it’s the small building in the middle.

*This is not a OneColumbia event. They have just been gracious enough to lend me the space.* 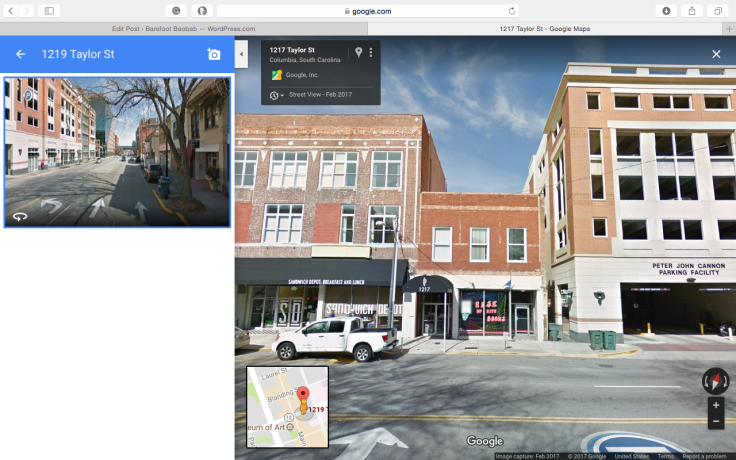 Do you have questions about history? Ask A Griot! Click here to listen and get booking information.